Which SUV is Right for You?

It’s no secret that Chevrolet offers an impressive range of SUVs, from the behemoth that is the Suburban to the compact Trax. There’s nothing that can take the cargo space crown from the Suburban, but the next two largest SUVs in the Chevy family are no joke either. If you’re stuck deciding between the Chevy Traverse vs. the Chevy Tahoe, let us help!

Before we start comparing the Chevy Traverse vs. Chevy Tahoe, we should make it clear that we’re not exactly comparing apples to apples. While they are both full-size SUVs, the Traverse is a crossover while the Tahoe is a traditional SUV. What does that mean for you, the consumer?

Meanwhile, the Chevrolet Tahoe is built with body-on-frame construction, like most trucks. In fact, the first generation of Tahoes was built on the Silverado platform. This means they handle like trucks, have comparable fuel economy, and similar powertrains and drivetrains. The benefits of this platform include cheaper maintenance and better towing capacity.

Like sedans, the Traverse base model has front-wheel drive, but other trims offer part-time AWD. Meanwhile, a base model Tahoe is RWD, but other trim levels offer 4WD. Learn about the differences between drivetrains here.

No matter what vehicles you’re comparing, fuel economy is a factor you can’t overlook.

In the battle between the Chevy Traverse vs. the Chevy Tahoe, the Traverse wins out because of its light unibody construction. The Traverse can hit 18 mpg in the city and 26 mpg on the highway, while the Tahoe trails behind with 15 mpg and 23 mpg respectively.

If you’re in the market for an SUV, chances are that cargo space is an important factor to you. Naturally, in this comparison between the Chevy Traverse vs. the Chevy Tahoe, we’ll take a look at just how much junk we can fit in that trunk.

Let’s start by considering the most important payload- people. While the Traverse can fit up to an impressive eight people in its spacious cabin, some models of the Tahoe outclass it by one seat. The question is, can it fit that many people comfortably?

To put it in perspective, the average commercial airplane gives its passengers 31” of legroom. With either SUV your third tow passengers will be cramped, but they’ll be a little more comfortable in the Traverse.

At a glance, the Traverse and the Tahoe have comparable cargo space. With both the second and third rows folded, they can handle 98.2 and 94.7 cubic feet of cargo, respectively.  With no rows of seats folded, they land at 23 and 15.3 cubic feet of cargo. As a crossover SUV, the Traverse doesn’t suffer from a log axle under its rear cargo area, unlike the traditional body-on-frame Tahoe.

While the Traverse’s unibody construction aids it in fuel economy and usable cargo space, the Tahoe’s body-on-frame construction helps it vastly outclass the Traverse in one category- towing capacity. A base model 2WD 5.3L engine Tahoe can tow up to 6,100 lbs, while the best-equipped Traverse with a 3.6L engine and a trailering package can only tow up to 5,000 lbs.

There are a number of different engines, drivetrain, and trailering package combinations that result in the Tahoe being able to tow up to 8,600 pounds. If you’re planning on hauling the heavy stuff, it’s clear Tahoe is the way to go.

The Case for A Traverse

So, who is the Chevrolet Traverse for? If the heaviest thing you want to carry around in your kid’s soccer team, the Traverse is a friendlier and more approachable option. It starts at a lower MSRP than the Tahoe, and you’ll find additional savings through its stellar fuel economy.

In addition to these benefits, the Traverse is relatively easy to transition to if you’re used to driving a sedan. Don’t get us wrong, you’ll have to get used to sitting up higher and taking up a little more space in the supermarket parking lot. But, we like to think these changes are well worth being able to load up on a moment’s notice for any adventure that comes your way.

The Case for A Tahoe

If you want something rugged and powerful, the Tahoe is a good option for you. It shares a lot more in common with pickup trucks than its crossover cousin, and it’s got the horsepower to back it up. You don’t have to take just our word for it- one of its most loyal customers is the US Military.

Body-on-frame construction isn’t just better for towing- it’s better for off-roading too. It’s better at withstanding the twists and turns that come with serious trailblazing, and its modular nature means that broken parts are easy to replace yourself. If you’re interested in how you can make your Tahoe an intimidating off-road machine, check out this article for inspiration.

Both SUVs are great, reliable vehicles with loyal customers. They come at significantly different base MSRPs, with the Traverse starting at $29,000 and the Tahoe at $49,000. We always advocate that you take your time in the decision process- do you need an 8,000-pound towing capacity or can you make do with 5,000?

Whether you’re looking for a Chevy Traverse vs. a Chevy Tahoe, we’ve got a great selection. Take a peek, and if you have any questions we encourage you to give us a call! Our passionate team of experts will be more than happy to help you make the best decision for your needs. 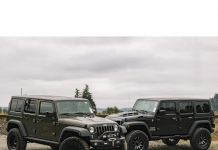 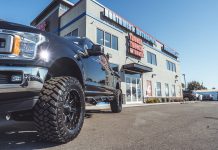 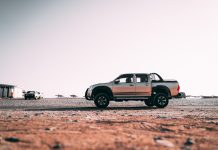