See the future of automobiles at the Seattle International Auto Show

The future of the automotive industry was on display at the Seattle International Auto Show on November 10, 2022 at the Lumen Field Event Center

With over 300 vehicles on display, ranging from luxury Italian sports cars to a dually Ram Longhorn rig, there was something for everyone. There were tons of electric and hybrid vehicles on display for those looking to see the cutting edge in vehicle technology.

You can find videos and pictures online of these new vehicles, but the Auto Show allows you to get up close and see all the details for yourself. Attendees could sit inside some of the vehicles and even schedule test drives.

Here are some of the coolest vehicles we saw at the auto show! 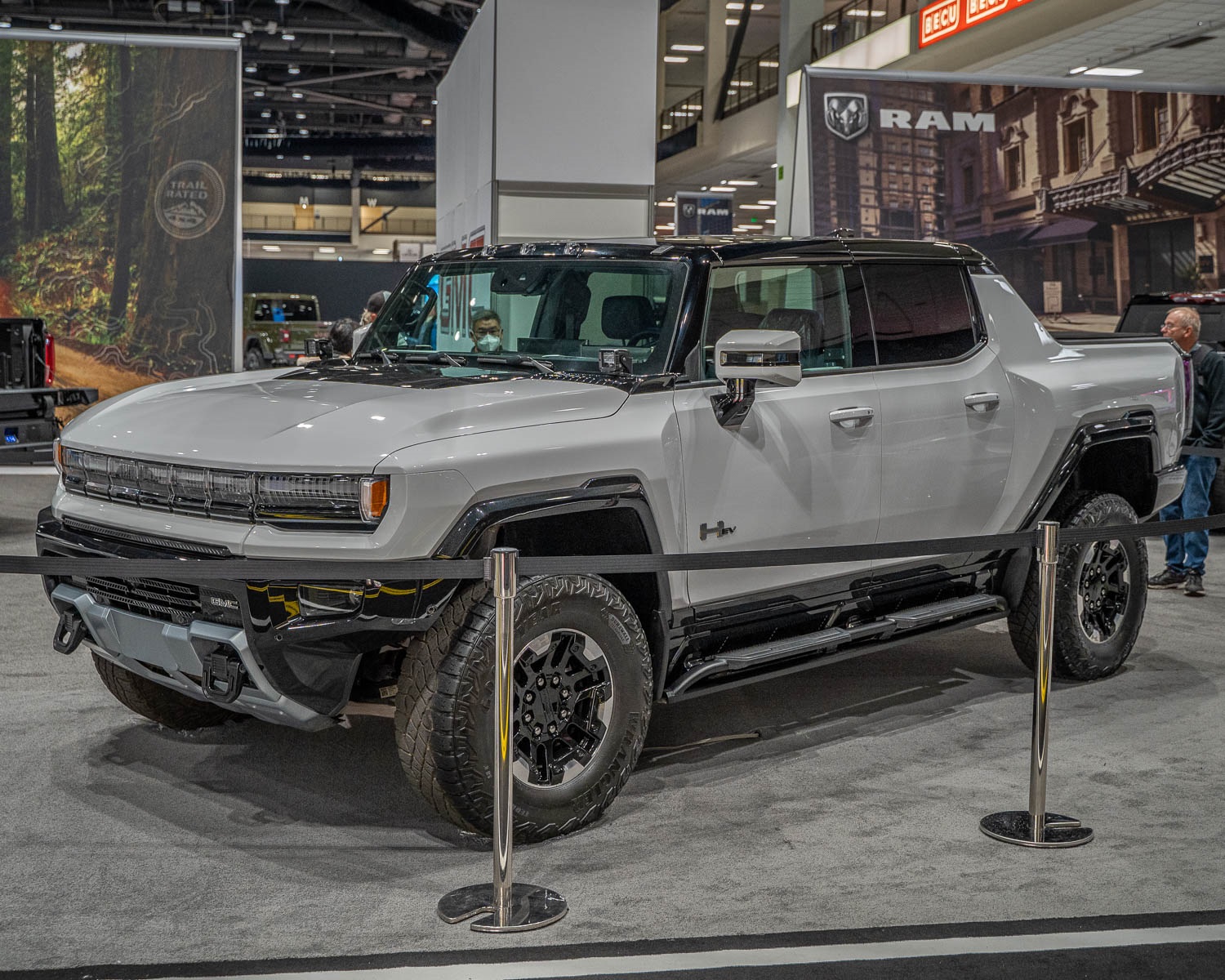 Visitors can get up close and personal with some of the rarest vehicles, like the GMC Hummer EV truck. The Hummer brand was discontinued in 2010 by GMC in large part due to its poor gas mileage and large sticker price. With the economic recession in 2008, drivers weren’t keen on the large, gas-guzzling trucks and SUVs. So, when GMC wanted to throw its hat into the electric truck ring, an electrified Hummer was the obvious choice. With a whopping 1,000 horsepower, the Hummer EV can go 0-60 in 3 seconds, about 7 seconds faster than the gas-powered 2008 H2. Unfortunately, we didn’t get to see a crab walk demonstration. 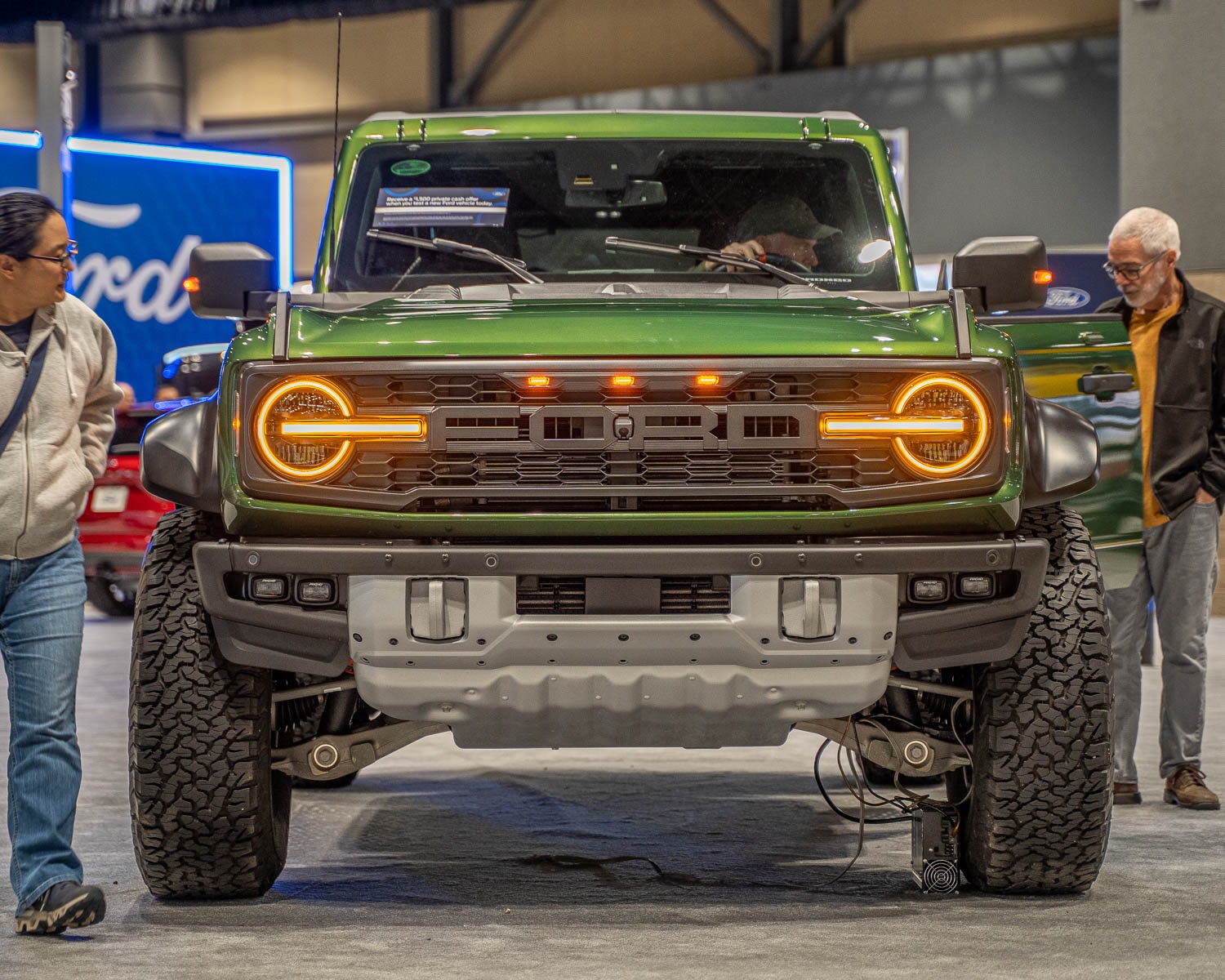 When you get up close to the Bronco Raptor, you can appreciate all the small details that Ford put into the SUV. While most of the attention goes to the exterior of the vehicle, the interior is just as impressive. With orange accents, you’ll never forget that you’re driving a Raptor. 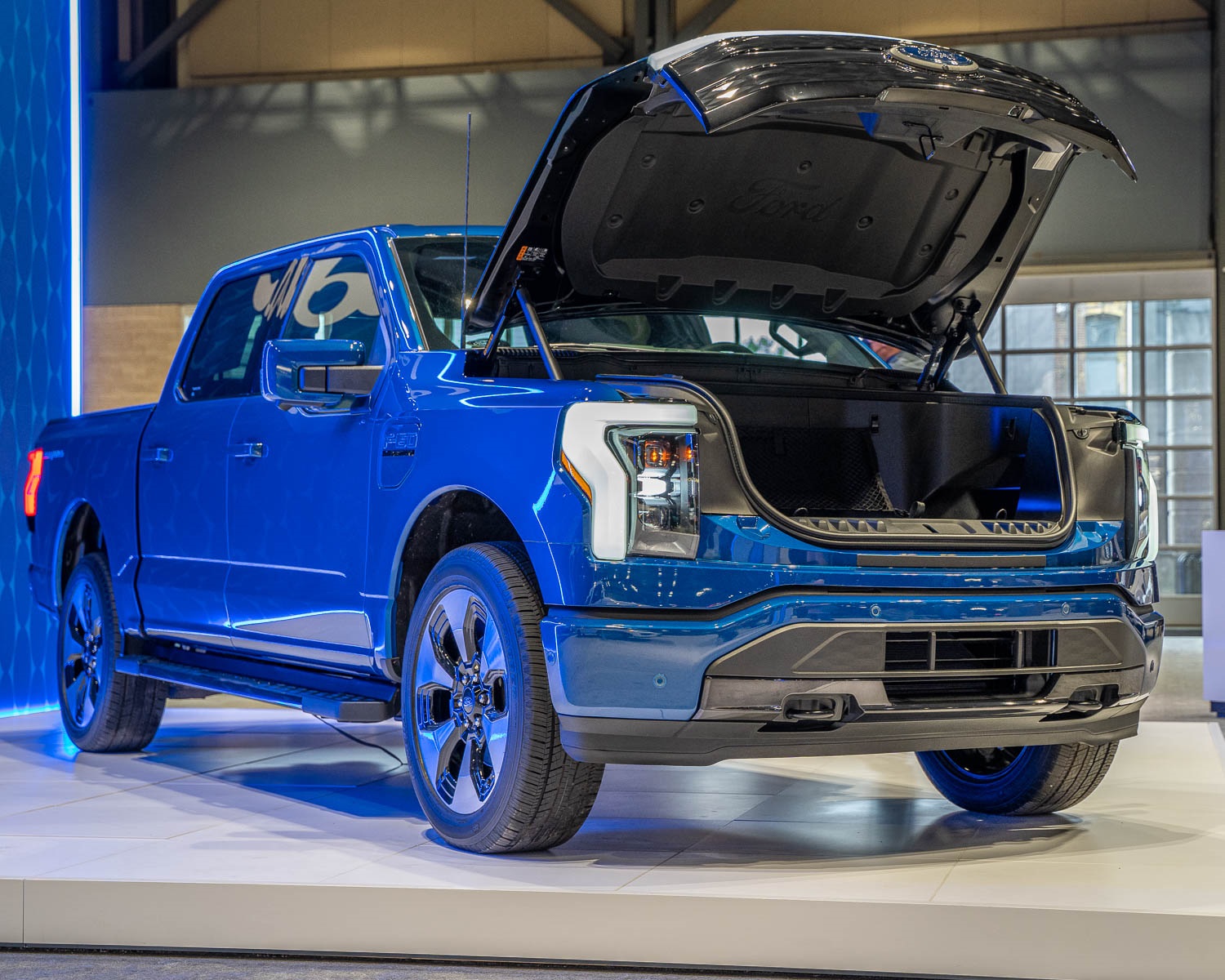 In the world of electric trucks, the Ford F-150 Lightning stands out because it doesn’t try to. Looking almost identical to the gasoline-powered F-150, the Lightning differs from all the other electric trucks on the market.  Instead of trying to look like a spaceship, the Lightning is just trying to look like a truck. But when you pop the hood, you’ll realize it isn’t your normal F-150. Instead of seeing an engine, you’re greeted by an empty frunk.

One of the unique features of the F-150 Lightning is the ability to use it as a generator to power your house for three days during a power outage. 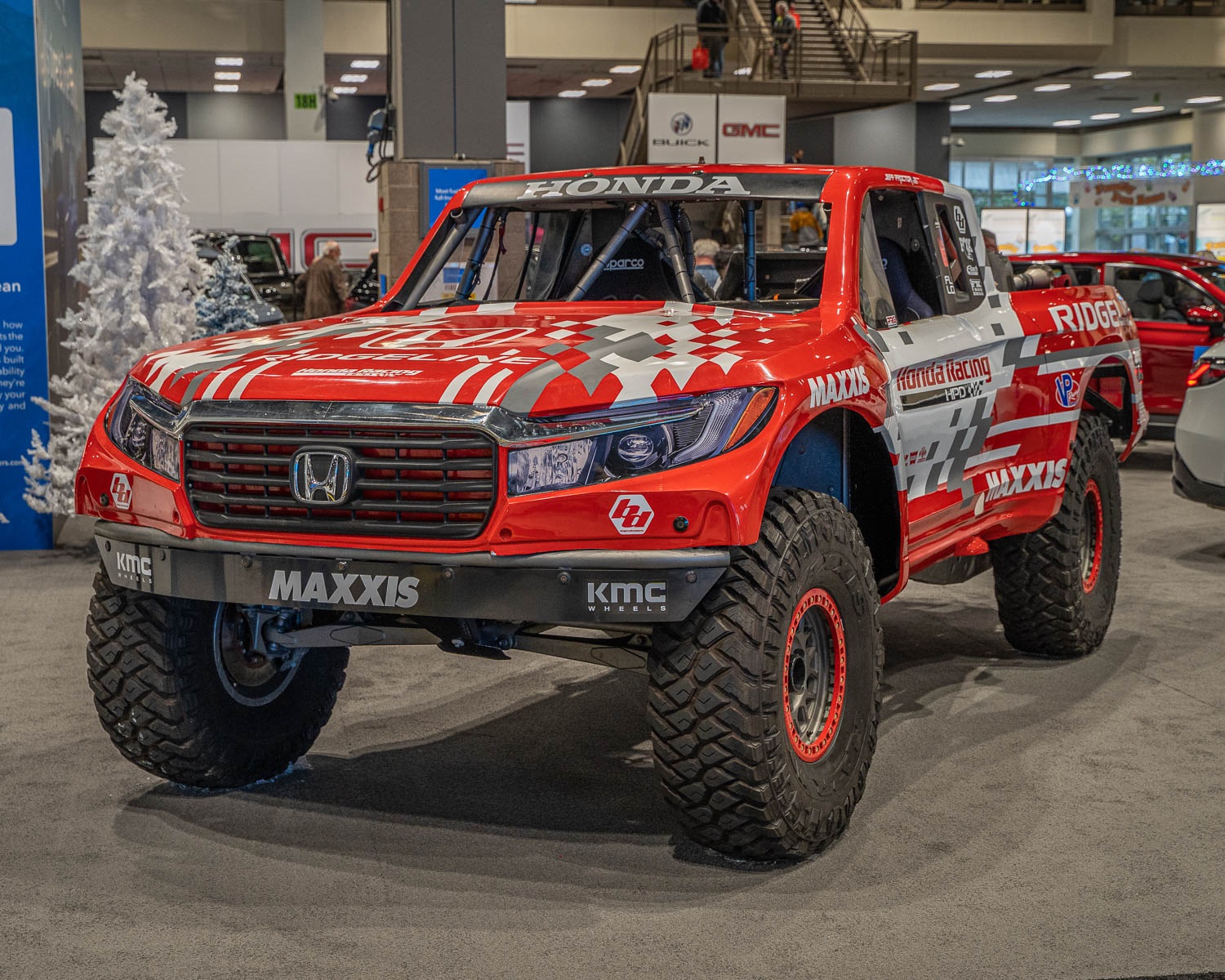 When we saw the Honda Ridgeline Race Truck, we were shocked. We thought to ourselves, “that’s a Ridgeline?”.

We’ll admit we haven’t always been nice to Honda Ridgelines in the past, but this Ridgeline race truck was unlike anything we’ve seen. We didn’t expect to see a Ridgeline truck with hulking off-road tires and a wide, powerful stance. The heavily modified Ridgeline truck won the Baja 1000 Class 7 race in 2021. Powered by a V6 engine, Jeff Proctor drove the Ridgeline to victory in the 1,226-mile-long race from the port city of Ensenada to La Paz in Mexico’s Baja California peninsula. 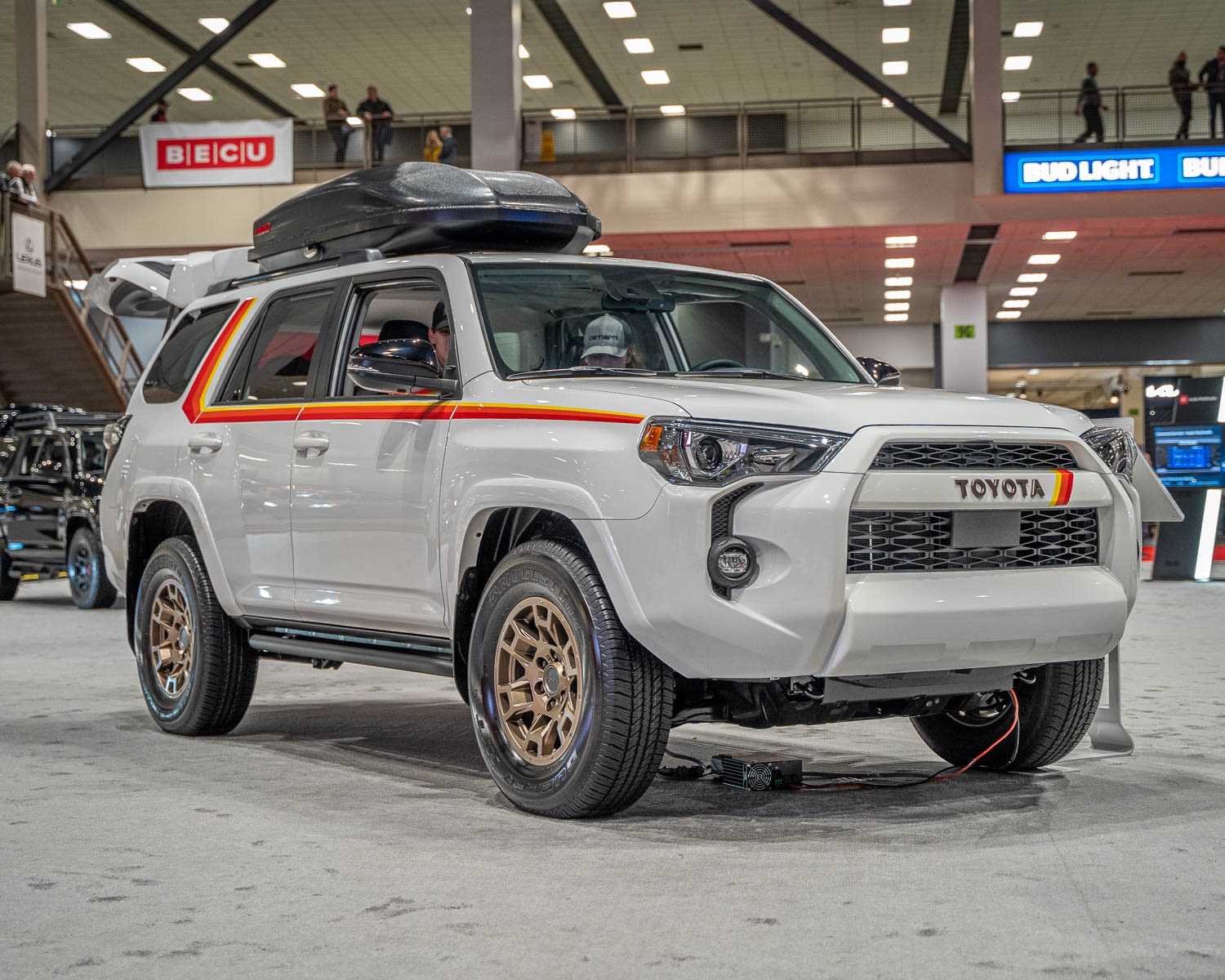 We see tons of Toyota 4Runner SUVs come onto our lots, so we become a little desensitized to these adventurous vehicles. But the 40th Anniversary Special edition 2023 4Runner grabbed our attention the moment we walked onto the show floor. With a red, orange and yellow accent stripe and bronze-colored wheels, the 4Runner brings an 80s vibe to the brand-new model.

With a cargo box on top, this 4Runner looked ready for an adventure. Whether you’re hitting the off-road park or going out for a camping trip, the 4Runner is always game. With a body-on-frame design, the 4Runner is a very capable off-road vehicle.